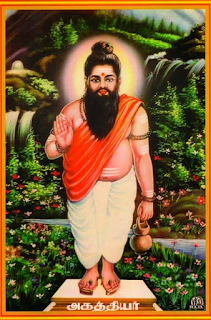 Agastya was a revered Vedic sage of Hinduism.[2][3] In the Indian tradition, he is a noted recluse and an influential scholar in diverse languages of the Indian subcontinent. He and his wife Lopamudra are the celebrated authors of hymns 1.165 to 1.191 in the Sanskrit text Rigveda and other Vedic literature.[3][4][5] Agastya appears in numerous itihasas and puranas including the major Ramayana and Mahabharata.[5][6] He is one of the seven or eight most revered rishis in the Vedic texts,[7] and is revered as one of the Tamil Siddhar in the Shaivism tradition, who invented an early grammar of the Tamil language, Agattiyam, playing a pioneering role in the development of Tampraparniyan medicine and spirituality at Saiva centres in proto-era Sri Lanka and South India. He is also revered in the Puranic literature of Shaktism and Vaishnavism.[8] He is one of the Indian sages found in ancient sculpture and reliefs in Hindu temples of South Asia, and Southeast Asia such as in the early medieval era Shaiva temples on Java Indonesia. He is the principal figure and Guru in the ancient Javanese language text Agastyaparva, whose 11th century version survives. 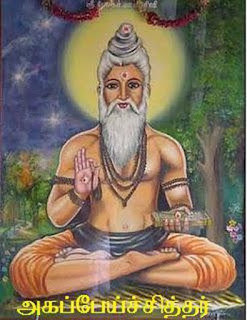 Setting off a wind of change, Agapai Siddhar, made a big impact in upping the popularity of Siddha System in the discipline of philosophy and kundalini Energy. His name literally indicates one who has conquered the ever restless (devilish) mind அகம் + பேய் + சித்தர். He is known for his trade mark of ending each verses with the word “Agapai” i.e.அகப்பேய் Agapai Siddhar was born in Siddhar Thiruvalluvar’s lineage. He led his life as a cloth merchant, even though he was a success person as a cloth merchant, he had an unquenchable thirst for divinity. He relinquished his commercial life and entered a life of an ascetic in search of truth. His quest was not answered properly, unconvinced Agapai Siddhar traversed through the length and breadth of the country in search of it. All of the answers he had been seeking became clear when he was meditating under a big tree with Siddhar Vyasar in his mind. In order to ameliorate the sufferings of humans, he recorded all his experiences and findings in the form of philosophical verses. He personifies the ego of a person as ghost i.e. (“Agapai”- which ultimately leads to worldly savages) and advises, reprimands and guides it to the path of enlightenment. In a nutshell he says that” once the mind is totally controlled [i.e.five senses] by pulling himself out of worldly indulgences, then the attainment of mukthi is guaranteed. He has authored several treatises on Alchemy, Siddha Medicine, and Moral and Mental philosophies. He was said to have performed numerous miracles in the world. He lived for several years and spent some time in Sathuragiri hills.     அலைந்தாயோ ' 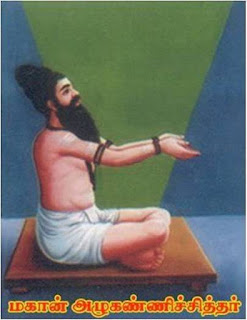 &nbspHe is also known as Azhugai siddhar Edaikkadar is considered to be his guru His major contribution is Siddhar gnanakovai His place of Samadhi is Nagapattinam.v> 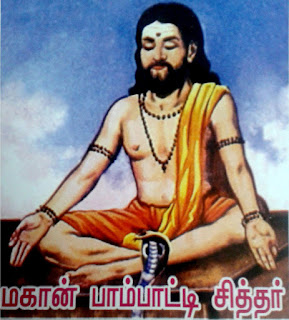 Pambatti siddhar was the latest from the 18 siddhars who lived at various time periods in India and mainly southern India. Some of his poems, roughly around 600 lines of text are available today. His poems are written in Tamil and he is famous for finishing his poems with the term 'Addu Pambe' which literally means 'play, o snake'. Even his poems are addressed to snakes. Some of his poems also addresses his spiritual teacher or guru. Pambatti siddhar comes from the line of saints who are believed to have possessed siddhis or supernatural powers through rigorous meditation and other spiritual exercises. He is also believed to have caught snakes and sold them for living before he ventured into his spiritual quest. Sri Pambatti siddhar was attained the eight supernatural powers called 'Ashtamasiddhi' after performing penance for a very long time in a cave on Marudamalai, near Coimbatore in Tamil Nadu. Also he lived in places like Mahalingamalai in Vathiraayiruppu, Kollimalai, Madurai, Puliyur and Bhavani. One notable aspect of his works are the usage of common slang language to explain complex spiritual experiences and siddhis. He has a flavour for imagination and often mentions that salvation is not possible without love in one's heart. He also has performed pooja and meditated near Holy Marudha Tree (Terminalia arjuna) in Marudamalai by praying to Lord Murugan. He is believed to have attained Samadhi by practising his rigorous techniques in Sankarankoil.[1][2] and Vaasi Techniques in Thirukadavur, Nagapattinam District.[3] His duration of life is believed to be 123 Years. His guru was Sattaimuni. 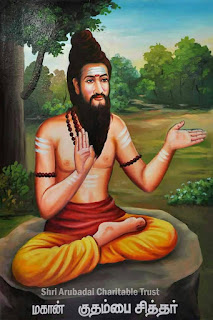 
Born into the Yadava clan Sir KudumbaiSiddhar was said to have been an attractive child. His mother used to adorn his ears with kudumbai an ornament and hence his name. At the age of 16 a saint is said to have blessed him with the knowledge of the Self. There after he retired from the materialistic world and wrote of God and self in simple language. His works include KudumbaiGnyanaSoostram 18, KudumbaiSiddharPaadalgal. 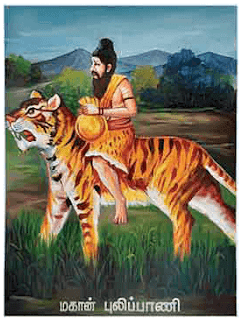 Many of us unaware of Pulipani Siddhar in the realms of Tamil Siddha and at the same time there will be few people left among who knows the world famous siddha who attained the peak in his creativity and the power of his meditation and ‘dapas’ who, through his the power of his meditation and dapas had created the status of ‘Navapashana’ of Sri Gnana Dhandapani is none other than our Bogar the Siddha among the main 18 siddhar called ‘Pathineu Siddhar’. Bogar accepted Pulipani as his andent disciple due to his sincerety and revereace to the guru and hence he wanted pulipani, unlike other siddhar, to lead a family life by marriage so that he and his successors generations after generation could edify the folk about Sri GnanaDhandapani, ‘yoga’, ‘vadha’, and meditations. Pulipani, readily obeyed the words of his ‘Guru’ Boga and married. He founded all ashram at the base of palaniampathi in the name of pulipani and started his service and his successors also have been following the service to the people generation after generation till now. It is not amaging that the seven direct descendants of pulipani, as they are the successors of siddha, attained deathless life through the art of yoga attained Jeeva Samadhi from the Bogar’s Jeeva Samadhi to the Pulipani’s Jeeva Samadhi at the base of Palaniampatti. 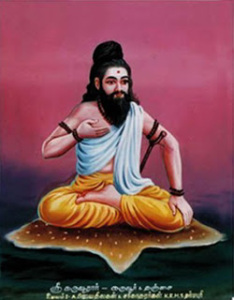 Born in Truchi in Tamil Nadu Sri KagaBujandara is said to have seen the truth in everything around him. This great saint is said to have witnessed in the form of a crow several cycles of creation and destruction Famous works include KaagaBujandaGnyanam, KaakaKaiveeyam 33 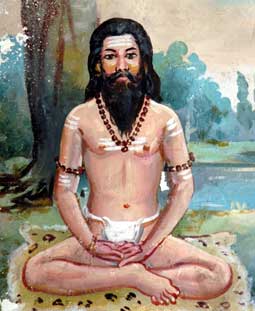 Once a wealthy merchant, an observation by his son that having wealth and not distributing it to the needy was like being like a needle with no eye, made him renounce the world. He visits many spiritual places seeking union with the Lord. The Lord gives him sugar cane saying that when the bitter came becomes sweet he would attain mukthi. At Tiruvotriyur the cane becomes sweet and playing with the children on the beach he asks them to burry him in the sand. They do so only to find a lingam in his place. His famous works include ThiruvedaimarudurMumaniKovai, ThiruEkambaMudayarThiuvandaadi.. 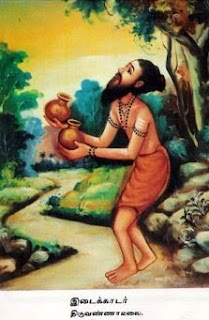 Sri Idaikadar is considered an incarnation of Lord Vishnu. It is said that once while out grazing goats he was blessed by a Siddhar with immense divine powers. It is said that he and his goats survived famine when foreseeing the difficult times ahead he built a house with walls of grain and fed his goats plants that survived without water. The planets visit him when feed on grain and goats milk they fall asleep. Changing their positions the siddhar assures that rain commences saving the land from famine. His famous works include Idaikadargnyanasoothram 70 and IdaikadarKanidaNool. 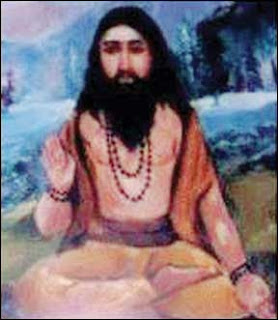 Sri KaduveliSiddhar was born in Kaduveli in the Chola era. Though his songs are popular through out the state, his life story remains obscure. His famous works include KaduveliSiddharPaada 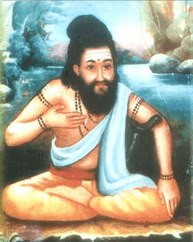 Karuvoorar belonged to a family of Viswakarmas. He is said to have sculpted in gold the dancing Nataraja as seen by the Chola king Hiranayavarman. It was under his guidance that the Brihardeeswarar temple was built by Raja RajaChola at Tanjavur. His famous works are KaruvoorarVaidyaKaviyam700, Karuvoorar Pala Thirattu..
'             ் 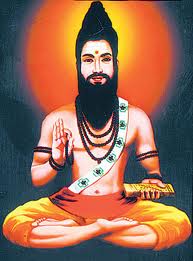 Karuvoorar belonged to a family of Viswakarmas. He is said to have sculpted in gold the dancing Nataraja as seen by the Chola king Hiranayavarman. It was under his guidance that the Brihardeeswarar temple was built by Raja RajaChola at Tanjavur. His famous works are KaruvoorarVaidyaKaviyam700, Karuvoorar Pala Thirattu..

13.KALAIKOTUMANI SITHAR்
Also known as Roma Rishi this great sage is said to have come from Rome. He is said to have mastered all eight siddhis. His works include Vroma RishiVaithyam 1000 and NaagoRoodam. 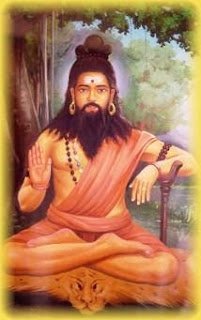 Born in Truchi in Tamil Nadu Sri KagaBujandara is said to have seen the truth in everything around him. This great saint is said to have witnessed in the form of a crow several cycles of creation and destruction Famous works include KaagaBujandaGnyanam, KaakaKaiveeyam 33. 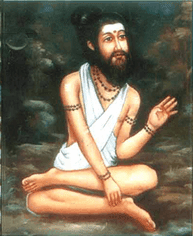 Sri SattaimuniSiddhar was bom in Sri Lanka and came to Tamil Nadu. Seeing MahaBogar in a temple and captivated by his radiance he abandons his family and becomes his disciple. His works in simple language appeal greatly to the common man his works include Sri SattaimuniKarpam 100 and Sri SattaimuniNigandu 1200. 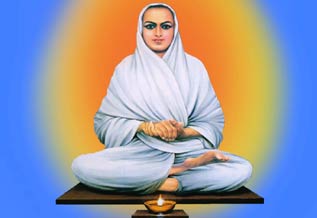 Ramalinga Swami also called Vallalar was a sage of infinite realization. From a young age he showed greater interest in the worship of God rather than in studies Once he is said of have placed a mirror on the wall, garlanded it and offered worship only to find not his image but that of Lord Muruga. Sri Vallalar preached the equality of all mankind. His penance was so great that lamps burned with water rather than oil. RamalingaAdigalar attained Mahasammadhi at Vadalur where he transformed his physical body into light to merge with the Divine. His famous works include MahaDeyvaMalai and DeyvaMaDniMaal 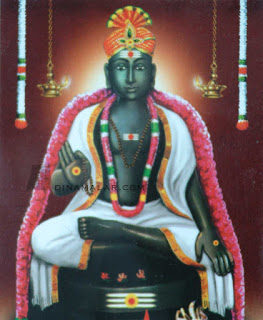 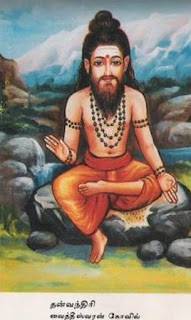 Sri ChennimalaiSiddhar was capable of curing incurable diseases. He is said to have united with Lord Shiva whom he found living in the same tree as him. The tree where he attained Jeeva Samadhi is even today an object of worship. His writings are found in the PadinenSiddharKovai. He is said to have written the PinakesarThattuvaPaadalkalnbsp; 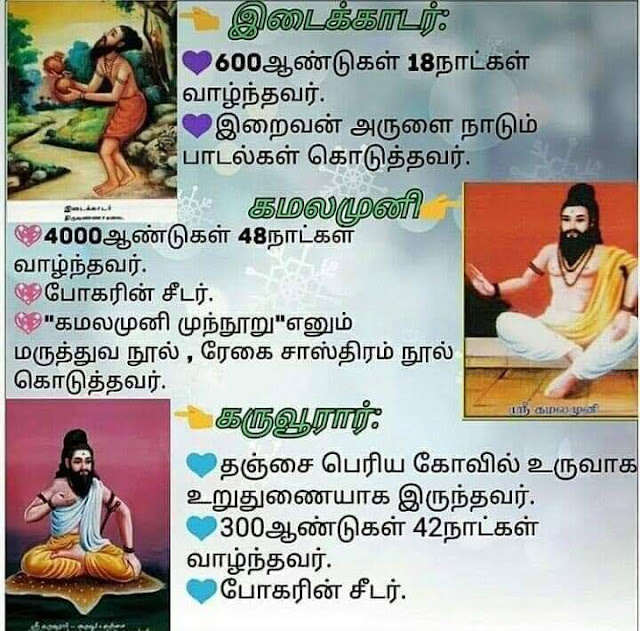 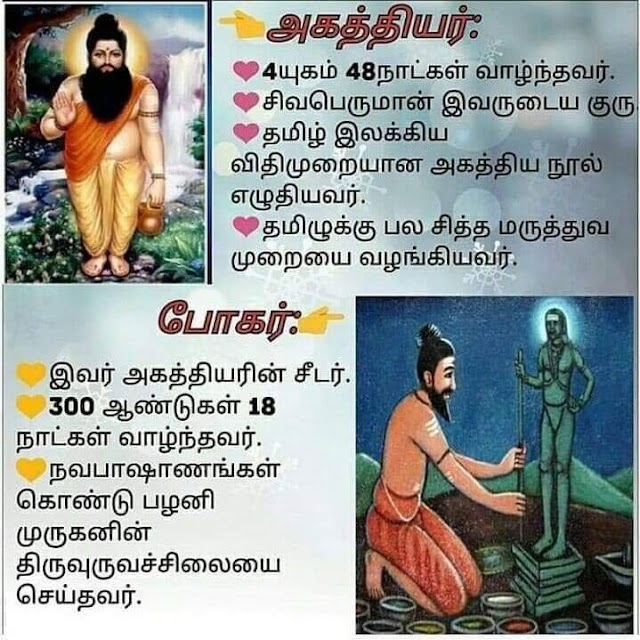 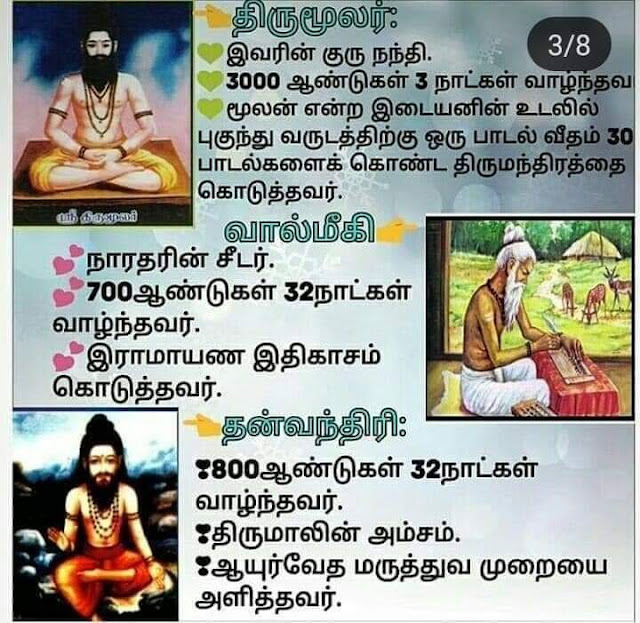 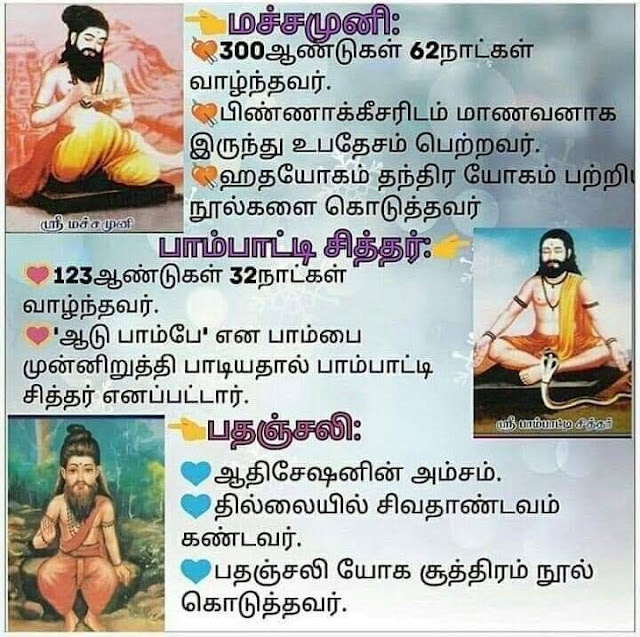 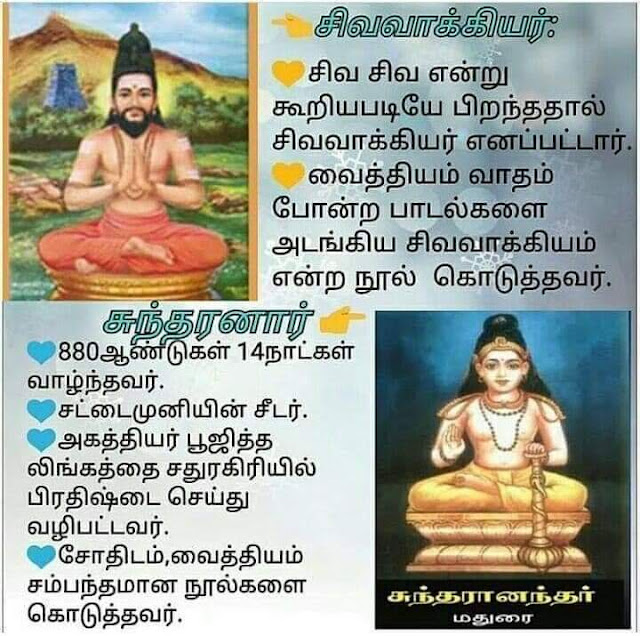 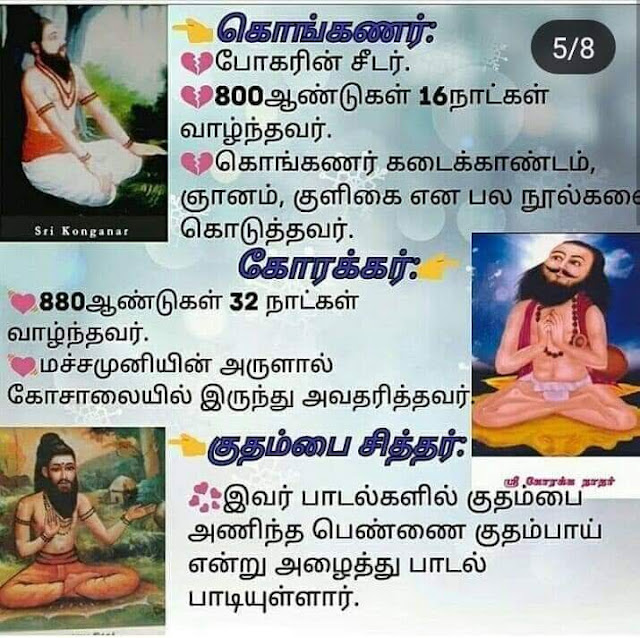